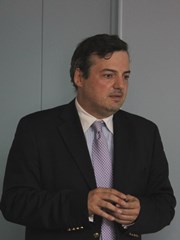 He studied philosophy, pedagogy and psychology at the University of Athens (B.Phil. in 1997). He obtained his Ph.D. from the same university in 2002 (“The Idea of Euthanasia in Contemporary Bioethics”). He has been teaching at the National and Kapodistrian University of Athens since 2004. In 2009 he became Lecturer in Applied Ethics at the National and Kapodistrian University of Athens (School of Philosophy / Faculty of Philosophy, Pedagogy, Psychology / Department of Philosophy), and in 2014 he was elected Assistant Professor in the same field. Since 2015 he is the Head of the Greek Unit of the UNESCO Chair in Bioethics (Haifa). He is Director of the UoA Applied Philosophy Research Laboratory and board member of the UoA Ethics and Deontology Committee and the Hellenic Pasteur Institute Bioethics Committee. He has authored four books in Greek, edited two in English, co-edited three in Greek and one in Serbian.